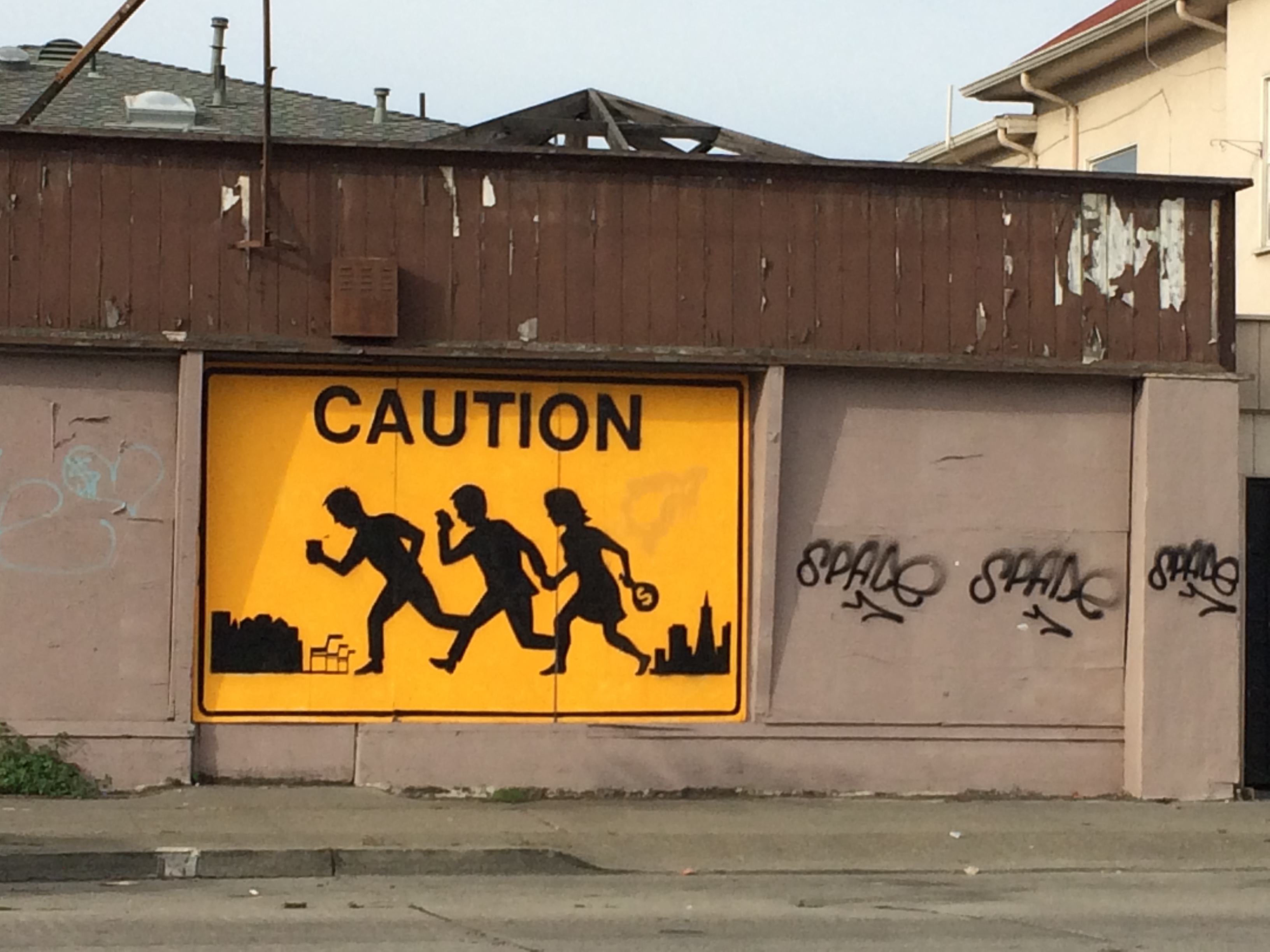 San Leandro Street, between 37th Ave and High Street, Oakland California, August 2015. It’s still there, just the surrounding graffiti changes. Now if I can grab a photo of the fence down the street, maybe around 35th Ave: Nuestro barrio no se vende, se defiende.

I liked this partial view of the church through the parking structure. (First Presbyterian Church on Broadway, from Summit Street. Oakland) 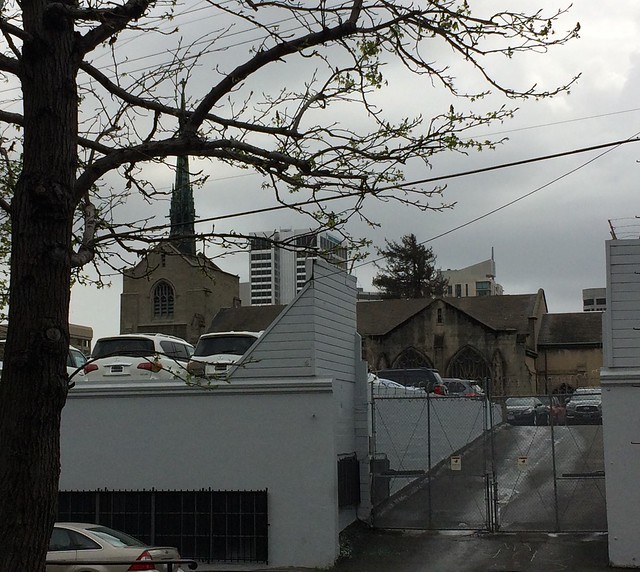 And then I turned and caught this glimpse of the temple between buildings. (Temple Sinai, on Webster I believe, from Summit Street. Oakland) 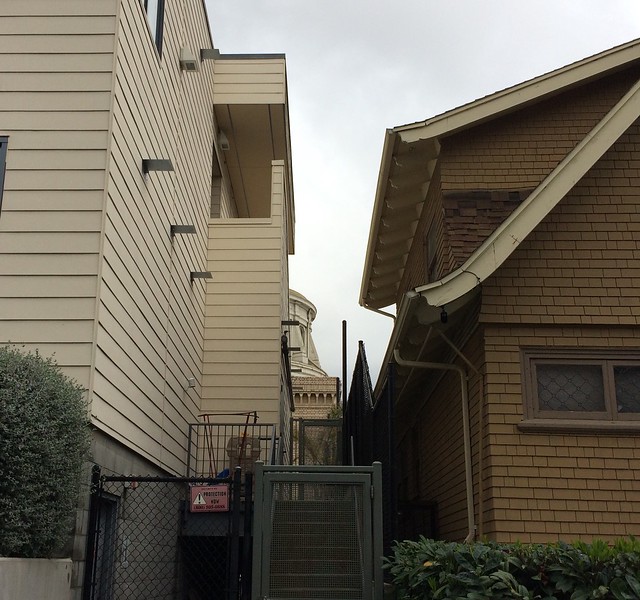 Why yes, I was over on Pill Hill the other day at work. Incidentally, chasing pills. 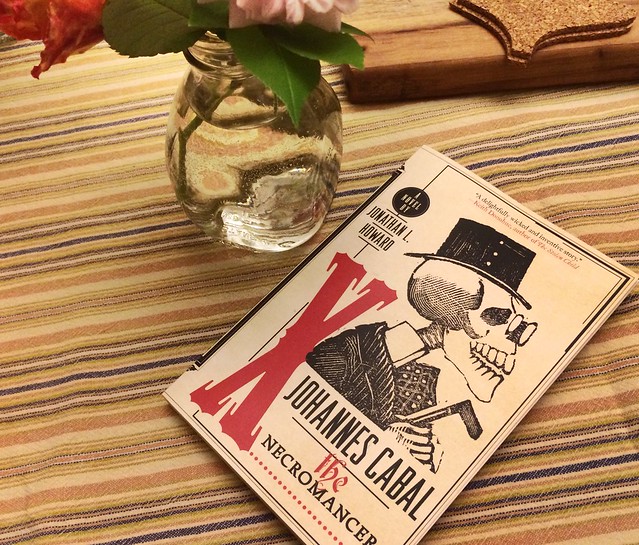 I’ve been listening to the Johannes Cabal (Jonathon L. Howard) audiobooks. They’re excellent listening: sarcastic, drily hilarious, often gross, sometimes sad, suspenseful. The Kid noticed the audiobook cover open on my phone and was interested momentarily. Now we have the first in the series in paper, lying casually on the table. He hasn’t picked it up yet. No surprise. No problem – I want them around for me to reread or lend out.

A Christmas to Remember , Betty Neels. A two-fer edition. Romance, medical setting, that old-fashioned feel. When the hero kisses the heroine, the heroine finds it mysterious. (The longer first story was published in 1997, the second 1976.) I quite liked the first one (The Mistletoe Kiss). The second was not as interesting a story, especially read right after the first, except that the heroine is a charge nurse (of course I can’t think of the UK term) and her work reminded me of my supervisor’s stories working in a London hospital. And then I remembered the Sue Barton books. I think I only ever read one, probably Sue Barton, Visiting Nurse, years and years ago. Funny thinking about it now – some of the scenes are still stuck in my head. The slip and the director, the puppy with a wire too tight, the newspapers laid down under the nursing bag for cleanliness, her brilliant suggestion of a career as chauffeur to some poor guy oh look how well he drives… I’m certainly not a nurse now because of that book (and didn’t think of nursing as a possibility until I was about done with my unrelated BA, not a childhood dream). Pretty funny remembering this is the only one I read, and I’m a public health nurse/visiting nurse. It’s all a coincidence! I swear!

Penric’s Demon by Lois McMaster Bujold, a novella in the Five Gods series. So good, a quick satisfying bite. Fantasy, solid world-building without constant explanations. Some of the others in the series are pretty hard reads, emotionally. This is not. It is charming. (I like this series a lot.)

Silver on the Road by Laura Ann Gilman, the first and only out so far of The Devil’s West series. Fantasy, road trip with horses, learning power, a bit of mystery solving. I liked it so much I’ve re-read it already and I pre-ordered the next. Not a cliff-hanger ending, but clearly part of a larger story arc. Because I liked this one so much, I read the first two of her Retrievers series, but they didn’t work nearly as well for me. Oh well.

Sailing to Sarantium and The Lions of Al-Rassan, Guy Gavriel Kay. Interesting books, compelling characters. But I can’t read many books that make me weep, and even though this may be fantasy, it’s fantastical historical fiction (yeah I see La Reconquista in the Lions, not to mention those Romans in Sarantium) and well, there are no Happy-Ever-Afters here I think. I won’t read the next Sarantine Mosaic book.

Act Like It, Lucy Parker. Great fun! And nicely written. Contemporary romance (the HEA is here), West End theatre, relationship for the purpose of public relations.

The Thin Woman, Dorothy Cannell. (Oh, look! The first in a series.) I enjoyed it mostly, struck me as odd. Not quite sure if on the madcap side or just plain odd and a touch depressing. Cozy mystery maybe?

The Kraken King, Meljean Brook. Adventure! Romance! Steampunk! A touch of zombies! And a dash of politics! Well-written, solid world-building. Not quite a Must Buy As Soon As Possible author, but I always get around to reading her books. Her steampunk world may be my favorite, and in large part because it’s not steampunk tech for the sake of steampunk tech, and steampunk is not the only thing happening. Also, some books have angst. And again, angst not just for the sake of angst. (Hey, I like some angst here and there too.) (Angst sure is a funny looking word now.)

And so many more books. 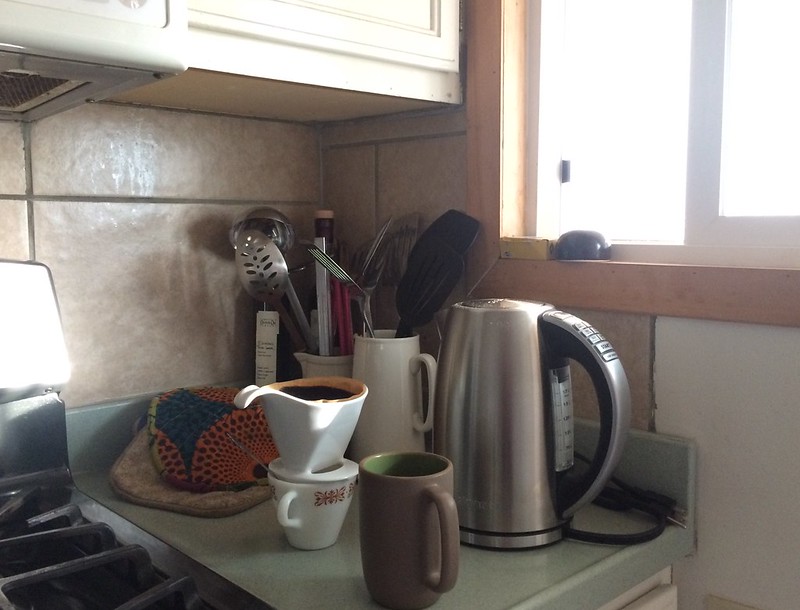 A good winter morning to wander around the tiny front garden. The green season is in full green and the roses smell sweet. 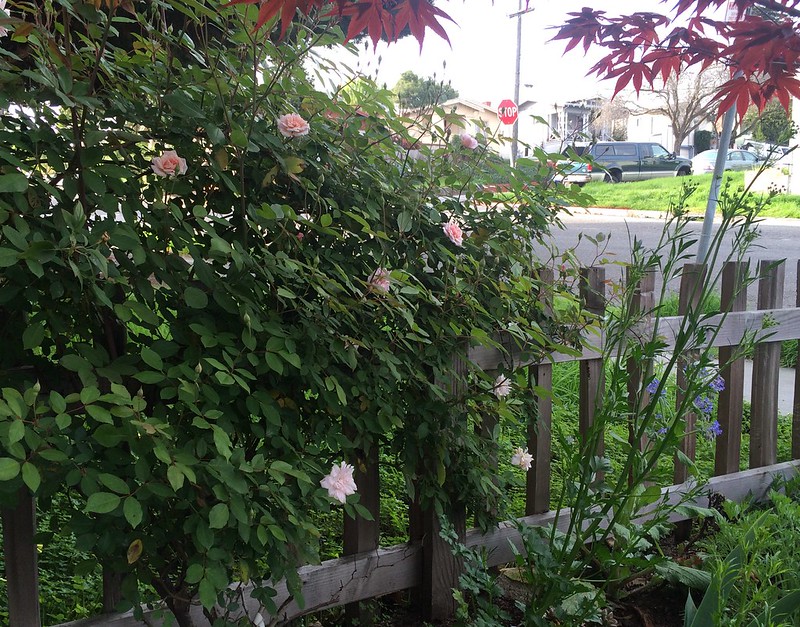 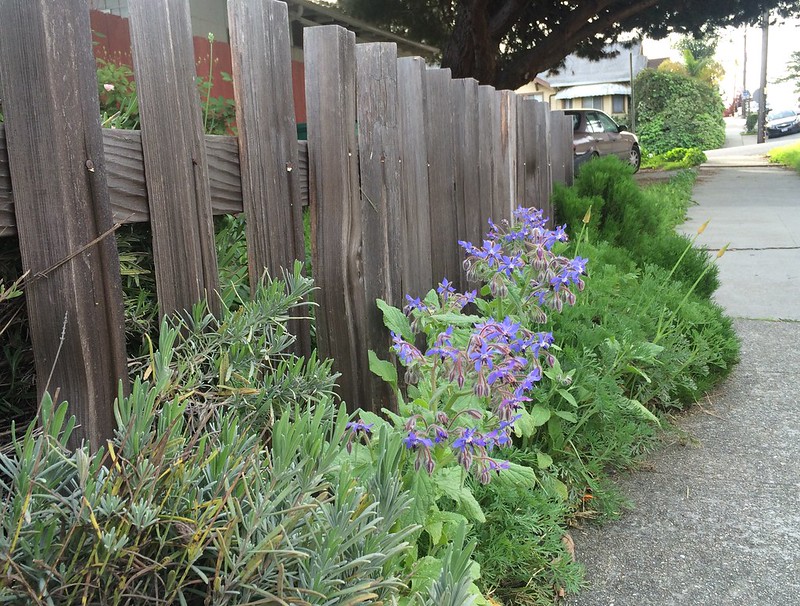 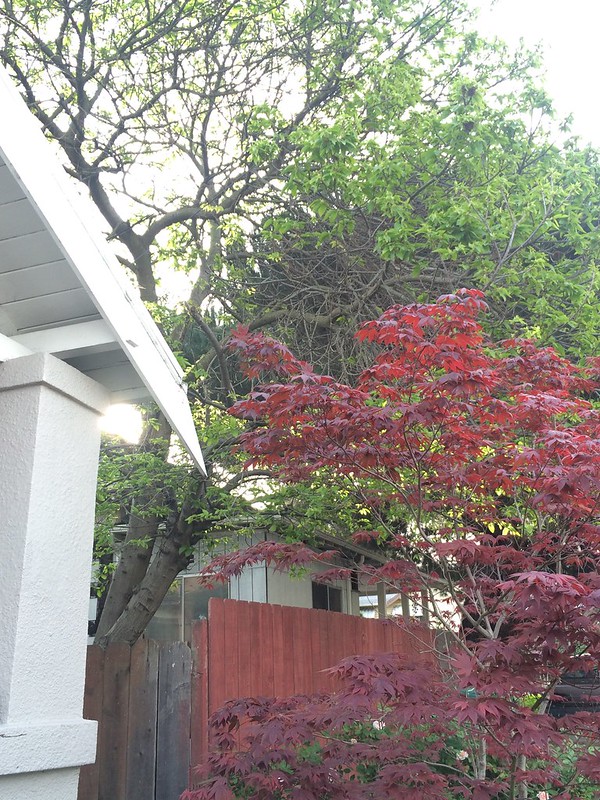 The first day of Spring is a good Sunday to visit la playa fria. 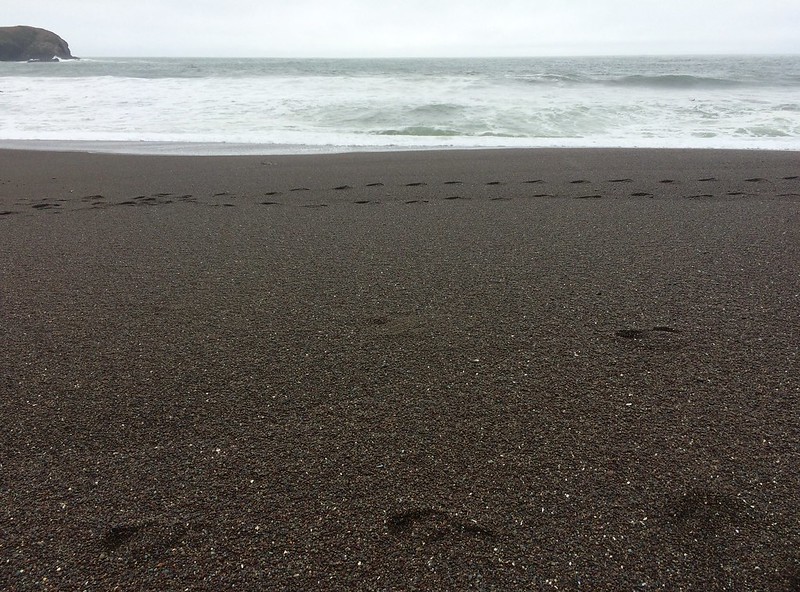 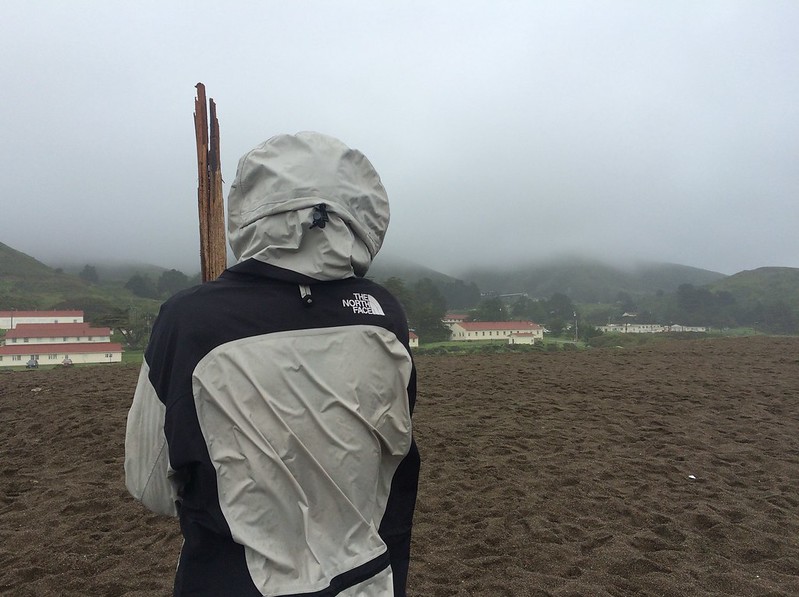 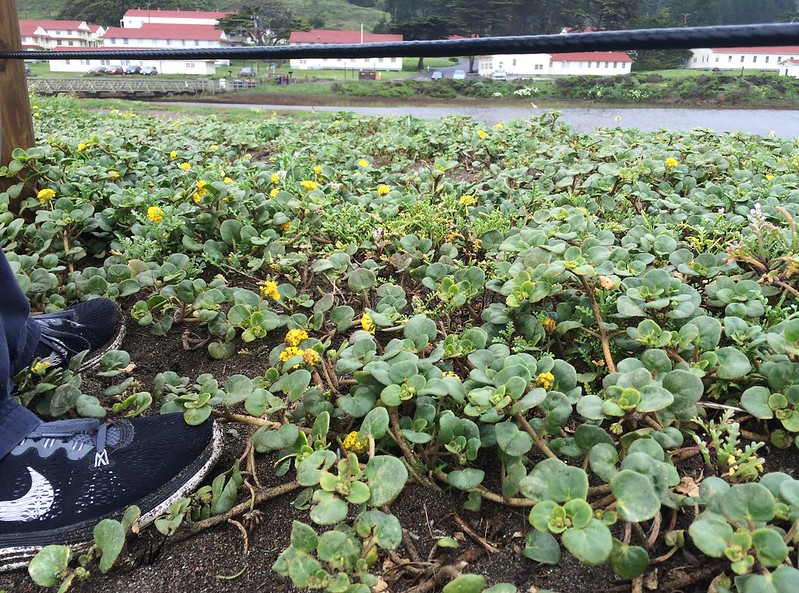 Rainy and gray outside, but the roses are still bright. 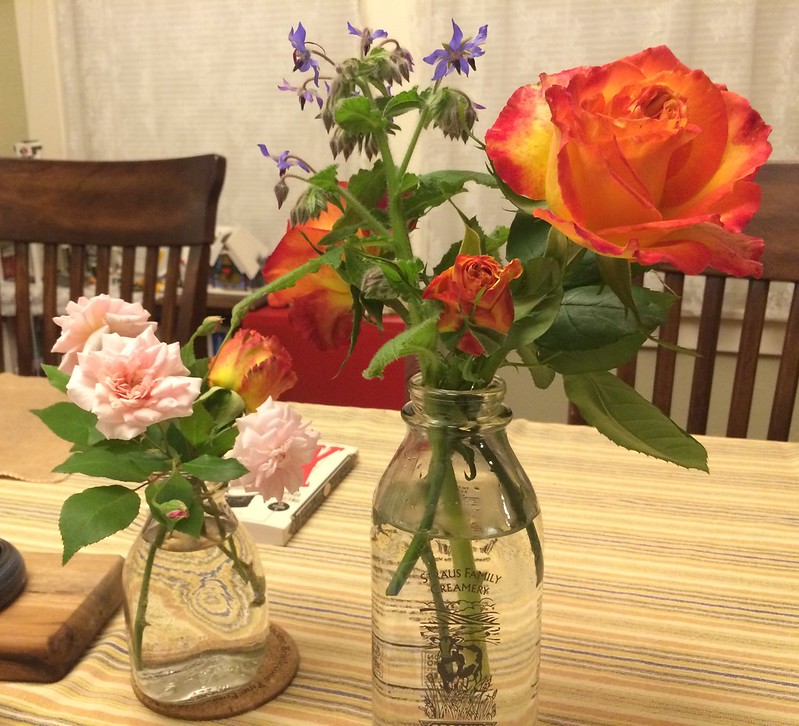 Rain! Over the last month or so.  A few photos from here and there and then and when.

Rainbow in San Leandro at sunset. The horizon burned gold, and the rainbow was behind. 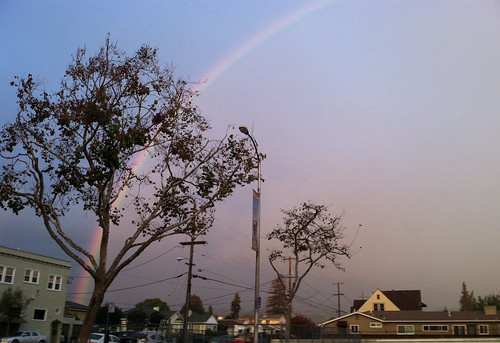 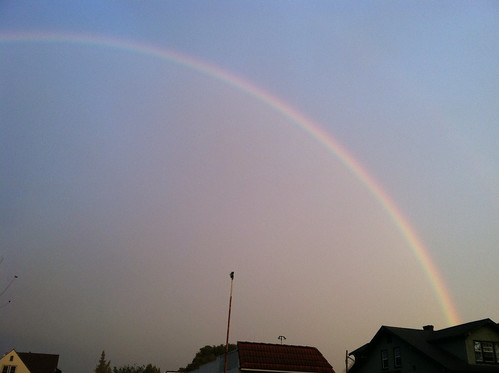 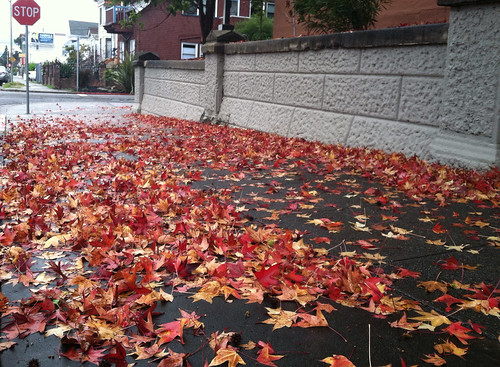 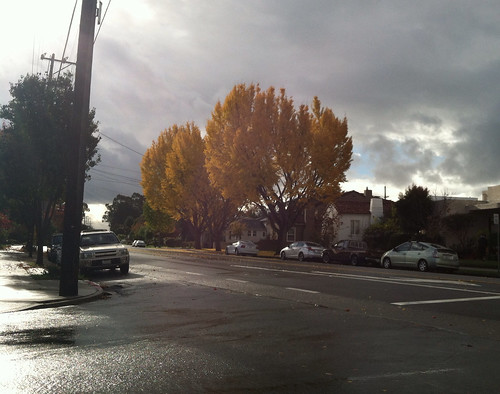 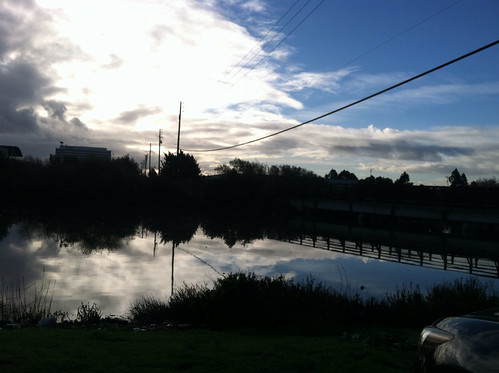 Filed under Excursions, Oakland, On Color

After a week of rain rain and so much rain (woohoo! and oh shit! all together), we have a dry weekend. Not sunny, not really, just a bit of blue and thin sun through the clouds. I woke up tired. The Kid woke up late and tired. But we dragged ourselves out, with Kid’s bike and my feet, and drove up the hill to our Grass Valley Trail. 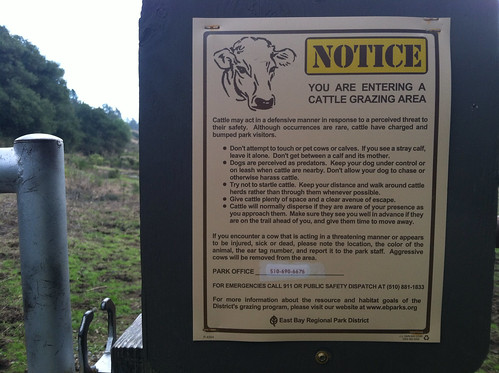 Right. We saw a sign recently that they were bringing cattle back to the valley. Okay. New sign. 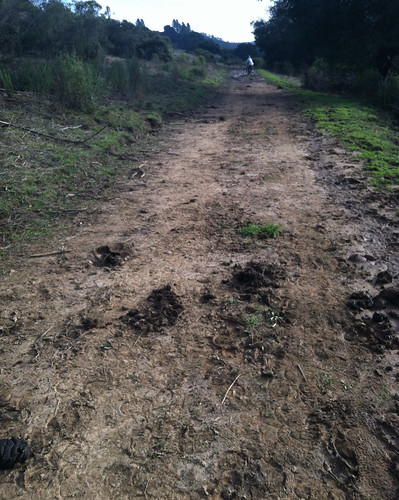 We expect mud. After all, it’s been raining this week. But that’s not just mud. And those aren’t just bike tracks and dog tracks. Or horse tracks. 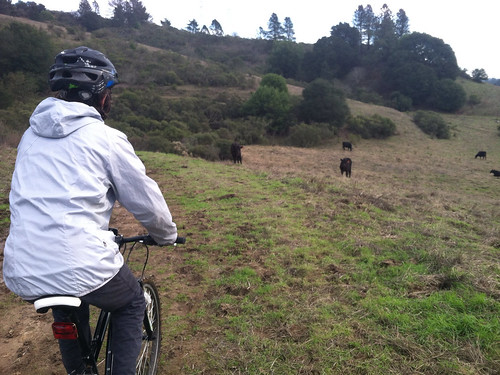 Oh look! We see cows! And calves! That’s so neat! Gosh, they make a lot of noise. And it’s pretty funny to see a big black cow emerge from the bushes where I’m used to seeing jays and maybe somebody’s dog. 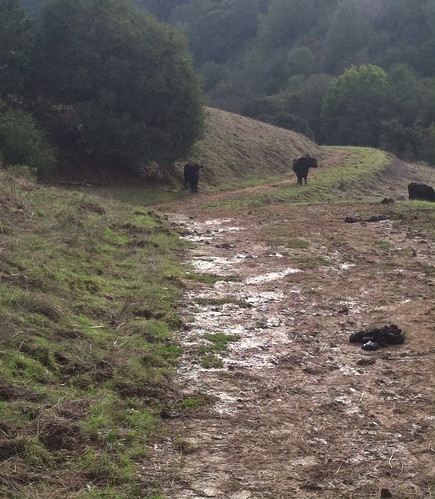 Uh oh. Cattle on the trail. What did that sign say?

Fine. It’s kind of a pain to deal with this muddy dug up cow pattied trail anyway. So we turn around and head back, defeated by the damn cattle. 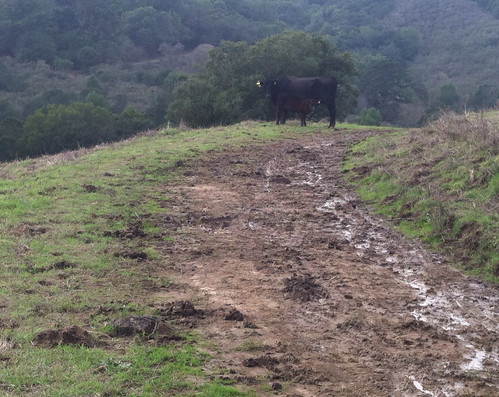 Cow nursing calf on the trail. Of course. At least there was enough room for us to go off trail and around. 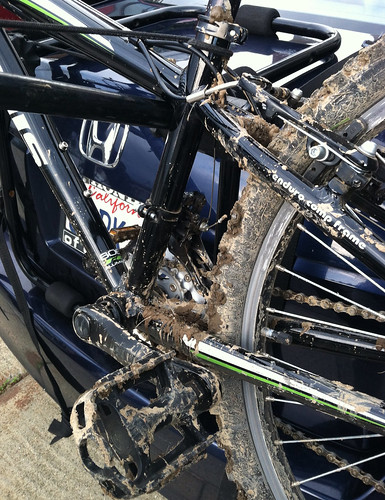 We made it back to the car. No cows charged us. We warned all the people we met walking dogs that yes, there really are cattle here right now.

I’m pretty sure that’s not just mud on the bike.

It was a good little excursion, if unexpectedly interesting. I laughed most of the way.

Small Scars
Create a free website or blog at WordPress.com.